There's a Keystone in every great invention.

Ventilators and their Electronics

COVID-19 has affected all of us. But no group has been affected as much as essential front line workers. These workers have kept their communities functioning and moving forward during a very challenging time. To all of these front line workers, and to everyone that has taken an active role in helping people through this pandemic, thank you. However, we would like to single out all of the nurses. National nurses week is celebrated every year from May 6 to May 12. This year, it has been expanded to National Nurses Month so that we can celebrate these brave people all month.

During this crisis we have read about the shortage of vital medical equipment, like personal protective equipment (PPE), needed to protect front line workers. We have also learned about how lifesaving devices, including ventilators, have been unavailable for many hospitals and medical facilities.

A medical ventilator, or respirator, is a machine that helps the lungs work. It's used for patients with breathing problems that can accompany a variety of conditions. Modern ventilators are computerized microprocessor-controlled machines, but patients can also be ventilated with a simple hand-operated bag valve mask. Ventilators are primarily used in three scenarios:

Unfortunately, many patients infected with COVID-19 need a ventilator because they have trouble breathing on their own.

In its simplest form, a modern positive pressure ventilator consists of a compressible air reservoir or turbine, air and oxygen supplies, a set of valves and tubes, and a disposable or reusable "patient circuit". The air reservoir is pneumatically compressed several times a minute to deliver room-air, or in most cases, an air/oxygen mixture to the patient. If a turbine is used, the turbine pushes air through the ventilator, with a flow valve adjusting pressure to meet patient-specific parameters.

When over pressure is released, the patient will exhale passively due to the lungs' elasticity, the exhaled air being released usually through a one-way valve within the patient circuit called the patient manifold. 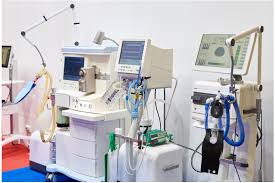 Modern ventilators are electronically controlled by a small embedded system to allow exact adaptation of pressure and flow characteristics to an individual patient's needs. Fine-tuned ventilator settings also serve to make ventilation more tolerable and comfortable for the patient.

Because failure may result in death, mechanical ventilation systems are classified as life-critical systems, and precautions must be taken to ensure that they are highly reliable, including their power supply. Mechanical ventilators are therefore carefully designed so that no single point of failure can endanger the patient. They may have manual backup mechanisms to enable hand-driven respiration in the absence of power (such as the mechanical ventilator integrated into an anesthetic machine). They may also have safety valves, which open to atmosphere in the absence of power to act as an anti-suffocation valve for spontaneous breathing of the patient. Some systems are also equipped with compressed-gas tanks, air compressors or backup batteries to provide ventilation in case of power failure or defective gas supplies, and methods to operate or call for help if their mechanisms or software fail.

Noninvasive methods, such as continuous positive airway pressure (CPAP) and non-invasive ventilation, which are adequate for patients who require a ventilator only while sleeping and resting, mainly employ a nasal mask. Invasive methods require intubation, which for long-term ventilator dependence will normally be a tracheotomy cannula, as this is much more comfortable and practical for long-term care than is larynx or nasal intubation. 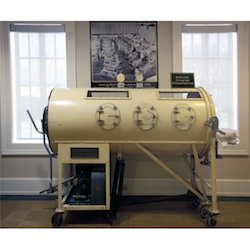 The development of the mechanical ventilation began in 1928 with various versions of what was eventually called the iron lung. A noninvasive negative-pressure ventilator developed by Philip Drinker and Harvard University’s Louis Agassiz Shaw Jr., the iron lung was widely used during the polio epidemics of the twentieth century.

John Haven Emerson developed a mechanical assister for anesthesia in 1949 with the cooperation of the anesthesia department at Harvard University. Mechanical ventilators began to be used increasingly in anesthesia and intensive care during the 1950s.

In 1955, Forrest Bird developed a pneumatic raspatory device that required no electrical power source to operate. The Bird Mark 7 Respirator, known as the Bird, changed the approach to ventilation and became a staple in medical facilities.

A decade later, Harry Diamond Laboratories (now part of the U.S. Army Research Laboratory) and Walter Reed Army Institute of Research developed the first ventilator that incorporated the principle of fluid amplification in order to govern pneumatic functions. Named the Army Emergency Respirator, fluid amplification allowed the respirator to be manufactured entirely without moving parts, yet capable of complex resuscitative functions. The elimination of moving parts increased performance reliability and minimized maintenance and manufacturing costs. This device was developed by

The next revolutionary step towards the modern ventilator took place in 1971 with the introduction of the SERVO 900 ventilator (Elema-Schönander), which provided volume control ventilation for the first time. The small, quiet and effective electronic ventilator used the now famous SERVO feedback system for controlling / regulating air delivery.

The COVID-19 pandemic has led to the development of several open source ventilators. It has been encouraging to see US auto manufacturers including Ford, GM, and Tesla quickly pivot to developing ventilators based on open source designs. Dyson created a new ventilator design in two weeks to help fulfill and order from the British government. The University of Minnesota Bakken Medical Device Center initiated a collaboration with various companies, including Digi-Key, to bring a  low-cost, scalable mechanical ventilator to the market. The Coventor device was approved by the FDA in only 30 days after conception.

Keystone Does its Part

A wide range of Keystone products can be found in the electronics used in ventilators and other critical medical devices. This includes LED holders, spacers and lens caps; fuse clips and holders; PCB test points and terminals; spacers and standoffs; panel hardware and PCB plugs, pins, jacks, and sockets and more.

To support the fight against COVID-19, Keystone has made all medical application shipments a top priority. We have expedited orders to medical equipment manufacturers to ensure essential manufacturing needs are met during these challenging times.