We’re perhaps most familiar with the use of radar guns by the police for catching speeders—a practice that started shortly after World War II and became increasingly common throughout the following decades. It wasn't long before radar was used in baseball to measure the speed of each pitch.

Before radar, figuring out how fast someone could throw a ball was little more than complicated guess work. All of this is possible because of Robert Watson-Watt, who invented radar after receiving a serious assignment from the British government.

The Origins of Radar

It was 1935, and the British government hired Scottish physicist Robert Watson-Watt to verify a German newspaper’s claims of a Nazi death ray that used radio waves to disintegrate its targets.  British leaders wanted the capability to zap their enemies into oblivion as well. No, this isn't the plot of a new Hollywood blockbuster—this was real life before the Second World War.

Watson-Watt’s theory was that you could learn a lot about an object—its speed, altitude, and direction of travel—by simply bouncing a radio wave off it. This would help the army locate enemy vehicles and other objects and properly prepare for an attack. Multiple other countries—including the United States, Germany, Japan, Italy, the USSR, the Netherlands, and France—invented their own radar systems independently in the years leading up to World War II, but Watson-Watt’s was the first.

By the time World War II started, several radar stations had been established throughout Britain—and not a moment too soon. Watson-Watt was quoted as saying that radar in World War II “was a vital factor in the successful defense of Great Britain." Robert Watson-Watt was knighted for his contributions to the war effort in 1943.

From Wars to Baseball 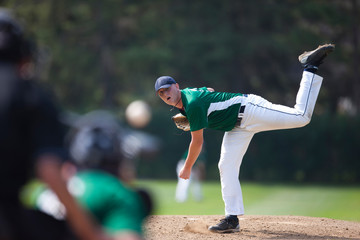 The jump from military use to police use probably wasn’t that surprising, and it happened within just a few years. However, it was a baseball coach who first saw another potential application in 1973. Michigan State baseball coach Danny Litwhiler noticed campus police using radar guns to catch speeding cars and thought he could use the technology as a training tool for his team.

Litwhiler bought a radar gun from the police and had it adapted for timing pitches. Within a couple of years, he was trying to get the attention of major league teams, but not everyone saw the potential. Even the Orioles, who were among the first teams to use radar guns, didn't provide guns for theirminor league teams for another six years.

Remember that at this time, pitch speeds were not displayed during the games, so there wasn't as much interest in timing them. At first, radar guns were used more to note the difference between a fastball and a changeup, to see if the pitcher was getting tired, or to evaluate the capabilities of players.

As with any new technology, there were inconsistencies in the beginning. Guns were expensive, different brands gave different readings, and not everyone used them. There was also disagreement as to whetherthe pitch should be timed as it left the pitcher's hand or as it crossed home plate.

Gradually, the technology became more accurate and standard protocols were developed. Instead of only comparing one pitch to another, radar guns were used to compare one pitcher to another. Today, radar guns are an essential tool in negotiating player contracts for pitchers.

Put Keystone Electronics on Your Radar

Radar,  like so many other high tech devices today, require precision electronic components for their successful operations. At Keystone Electronics, we've been committed to manufacturing precision electronics and hardware for more than 70 years.   As you watch the World Series unfold and pitching speeds flash across your screen, think about  some of the Keystone products you’d find inside the radar gun clocking that pitch.

To learn more about our capabilities and services, please contact us today.