Can you picture a world without Elvis, The Beatles, The Who, Van Halen or Aerosmith? Not the easiest thing to do, right? Think again. None of these musicians – none of the music you grew up with – could ever have been possible without one simple ingredient: an engineer at Gibson named Lloyd Loar, the inventor of the magnetic pickup, and great- 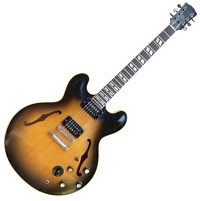 grandfather of the modern electric guitar. In 1924, Loar discovered that if you placed a magnetic pickup under a guitar’s strings, you created an electric signal that could be picked up by a wire coil, thereby “amplifying” the instrument.

But great inventions, no matter how trite they first may seem, have a habit of cropping back up. A few years later, George Beauchamp, a frustrated Los Angeles musician specializing in traditional Hawaiian music, wanted to coax a louder sound out of his Hawaiian guitar. To that effect, he teamed up with a Swiss immigrant named Adolph Rickenbacker to create what many historians consider to be the first bona fide electric guitar, the so-called “Frying Pan,” as its critics derisively called it. Rickenbacker and Beauchamp used Loar’s magnetic pickup as a means of augmenting Beauchamp’s guitar. Hawaiian music had never been heard at such a revolutionary volume.

Who’d have thought that tweaking a Hawaiian guitar would lead to an industry that peaked at $36.9 billion in worldwide sales per year? Who’d think a magnetic pickup could stir up a racket like that? All one can say is that at the end of the day, it’s the little things, just like the keystone of an arch, that make the big things work. At Keystone, we design and manufacture components that can be applied to any sort of electric guitar, pickup controller or amplifier. Such as: fuse clips and holders, 9 volt battery straps and holders,battery clips, contacts and holders,  terminal boards and strips, to name just a few.  Remember, when it comes to quality products, “It’s what’s on the inside that counts.”