The words to the Star Spangled Banner can evoke many emotions when singing or listening to them.  But, the one verse that many remember around the 4th of July is this:

And the rockets' red glare, the bombs bursting in air,
Gave proof thro' the night that our flag was still there.
O say, does that star-spangled banner yet wave
O'er the land of the free and the home of the brave?

Our national anthem does a good job of summarizing our nation’s history.  And even today as we live our lives enriched by the many freedoms that we often take for granted, we also often forget that we obtained those freedoms because of the use of defensive weapons elegantly portrayed in the words of our national anthem.

Today’s annual 4th of July fireworks are a symbolic way of acknowledging the rich history of battling for the cause of freedom, liberty and ability to pursue happiness.

Interestingly both of these symbols of freedom – fireworks and weapons of defense have a common ancient ancestry that began in China.

The exquisitely timed fireworks everyone enjoys on the 4th of July, actually were invented in 7th century China.  The Chinese invented fireworks and perfected the art of firework displays and rocket powered pyrotechnics to accompany many festivities of the time.  As early as the 13th century, Chinese firework artisans began to deliver their well-crafted displays via rocket-propelled devices so that more and more of the people could view them during religious or military celebrations. 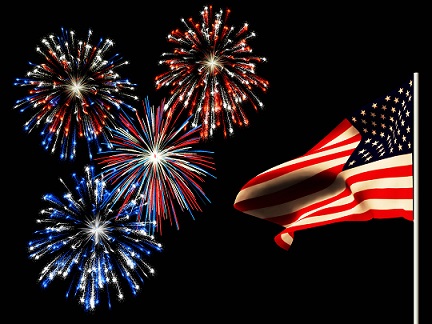 Much like everything to do with explosives, the ancient Chinese were the first to take advantage of the explosion concept when it came to creating weapons of war. Historians believe that black powder tipped fire-arrows date back to 11th century China. It was these rocket propelled weapons that gave rise to similarly styled weaponry of the 1930s.

Few weapons have changed the face of warfare like the Rocket Launcher M1, or as most of us know it, the bazooka.  Created by the U.S. Government in the 1930’s and first produced in partnership with General Electric in 1942, the original bazooka, was a breakthrough in anti-armor technology.  Named after a popular 1930’s musical instrument, the bazooka gave ground troops an effective shoulder-fired weapon to fight against armored vehicles and later aircraft.

It is truly fascinating that two inventions from the ancient lands of China with vastly different end-usages found their roots in the same basic technology. Of course, fireworks and bazookas actually have more in common than basic ancestry and that is freedom.

Fireworks celebrate our freedom, and weapons like the bazooka have helped to maintain that freedom for future generations. It is certainly something to think about when you are sitting back and taking in your local fireworks display this and every July 4th.

Whether it’s electronically launched fireworks or in electronic guidance systems of both the weaponry, there are a variety of Keystone components inside.  You can find Fuse Clips and Holders,  Screw Terminals and Terminal Blocks , Alligator Clips , Mounting Brackets,  Quick Fit Terminals.